Toby and I - and our children - have become big fans of the National Parks. We are so grateful that our country had the foresight - due to the influence of such naturalists and conservationists as John Muir - to protect some of our most beautiful areas. We can only imagine condos sticking out of the sides of the Grand Canyon and the Sequoias totally demolished but for these efforts. (I have actually seen conservatives I follow criticize the government for taking over the lands and creating the National Parks and said that such things should be left to private industry. I don't know on what planet you think that would work. Suffice it say that we completely disagree on this.)

Last summer we saw the Grand Canyon and are headed back this year. We also saw Four Corners, Monument Valley, and headed up to Estes Park to see the Rocky Mountain National Park, then home through Santa Fe to see Meow Wolf. The year before, we saw Royal Gorge, Pikes Peak and enjoyed stays in Breckinridge and Winter Park, Colorado, before heading home through Wichita, Kansas, to see a very neat museum. More on those travels - which included both National and State Parks as well as a smattering of art and culture - in another post. (As I write this, Toby is actually working on his photos from all these trips.)

The point of this background is that in preparing for our trips - and because we're all just so excited about our trips - we started watching videos on YouTube about the various places we plan to visit. That has been an invaluable tool in preparing for our family vacations to get an idea of what to see where and how to see it. It's how we discovered The Train for a way to see the Grand Canyon and add to the fun and number of experiences we had. We did that last year and are going to again this year to get to the Grand Canyon. Since we cover a good bit of territory on our road trips, we do a LOT of research beforehand. We plan it all out very carefully. Toby makes a spreadsheet, we open upGoogle Maps, bring up the website of the places we're going, etc. We might have 10 tabs open on our browsers between us. We make all our hotel reservations ahead of time and even do research on restaurants so Augie and I - who have to - eat gluten free have abundant options. If we need to, we make restaurant reservations ahead of time as well.

Anyway, in watching these videos, we also learned more about how our National Parks system came to be and who the players were in doing that. I know who John Muir is, of course; I have mentioned already that I have the t-shirt with his most famous quote on it:

"The mountains are calling and I must go..."

It's also on my keychain:

But there is so much more to him than that and I wanted to read more about him. So, inspired by what we were watching and learning, I went onto Amazon and bought a few books of writings by Muir. He was a prolific writer throughout his life from essays, to journals, to writing entire books about his various travels and his life. These writings also provide a goldmine of quotes, which I just naturally love - be they from Orthodox sources or great naturalists.

Here are the books I purchased and I have a number of others on my Wish List. I'm not going to write a review of them necessarily, as none are finished except his book of quotations which I devoured along with my lunch the other day. It was just a so fantastic. I'll describe each a bit as best I can given how much or little of them I've read so far, but I can already sum them all up this way: they add to my peace of mind, enjoyment, understanding and love of nature. Other than certain religious materials, I'm not sure that there is anything better you could read than his writings, especially before bedtime or after a stressful day.

First, I purchased a book that actually contains several of his books and a number of his essays: 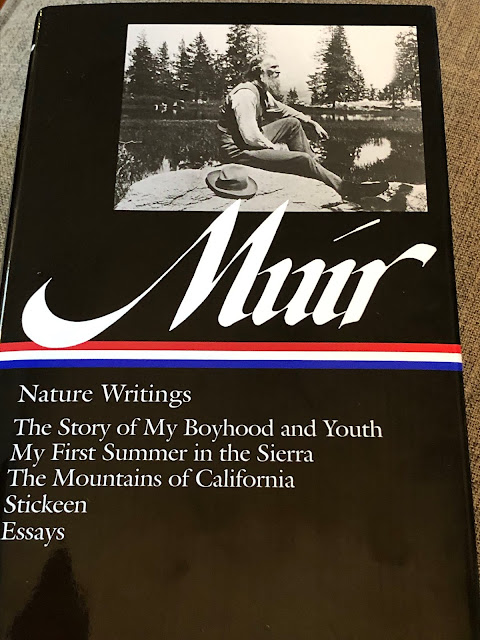 This book contains the book he wrote of his boyhood which includes his immigration to the United States through his time at University. I'm about 3/4 of the way through it and it is just spectacular. You read about his life growing up but it is primarily focused on all the wildlife and vegetation he observed. From time to time, you get a short exhortation to man to protect the environment and care about it and all the benefits to one's mind and soul that come from that. It's not preachy and it just flows naturally in the pages. Then he's back to talking about what else he saw or another adventure. It's such easy reading. His writing style is just spectacular. I told Toby that if John Steinbeck had written this well about nature, I'd actually have read every chapter of The Grapes of Wrath rather than skipping over all the ones about animals after slogging through the chapter about the turtle crossing the road. I realize it was a metaphor. For depression, I think. Anyway, I had no idea that the books would be this way or that I'd enjoy them this much! Of course, there are other books as well within this one, but I'm going to skip them for the moment because I want to read his books roughly in chronological order.

To that end, his next book - chronologically - is actually not part of this one, but is his extraordinary first journey of 1,000 miles to the Gulf. 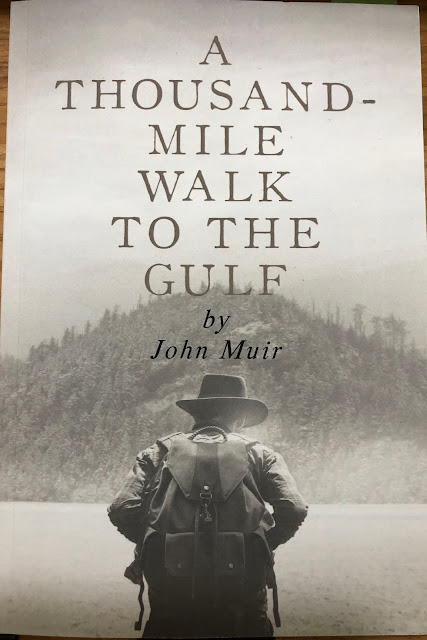 I've read the Introduction to this one and it will be just as wonderful as the first, I'm certain. The idea that one would just take off for a 1,000 mile journey on foot at that time fascinates me. It's also a very different part of the country than what he is really known for - the Sierra Nevada Mountains and California.

The next book chronologically is My First Summer in the Sierra which is contained in the collection above.

I also purchased In Nature's Heart - The Wilderness Days of John Muir which contains selections of Muir's writings, longer than quotes, but shorter than essays, divided up by the time of day: Dawn, Morning, Midday, Afternoon, Evening, and Night. The way that's organized calls to me. I like seasons and times of day and musings on both. There is something to be said for the rhythm of the day and year and the feelings and activities that naturally take place or are experienced at some times but not others. 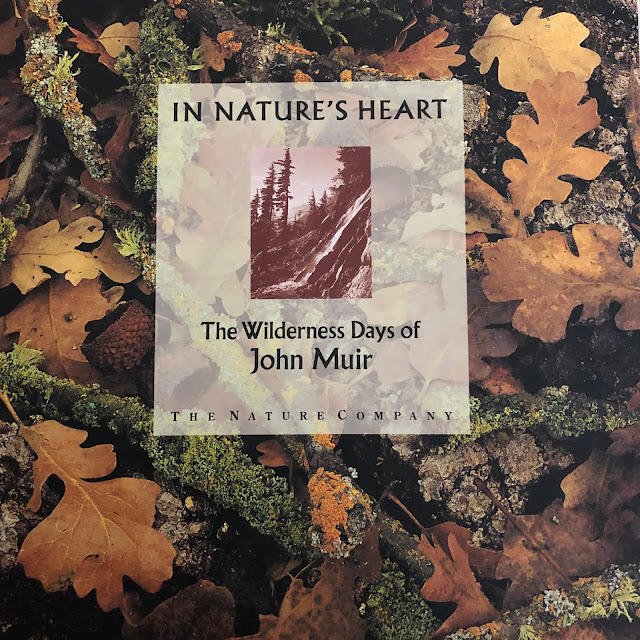 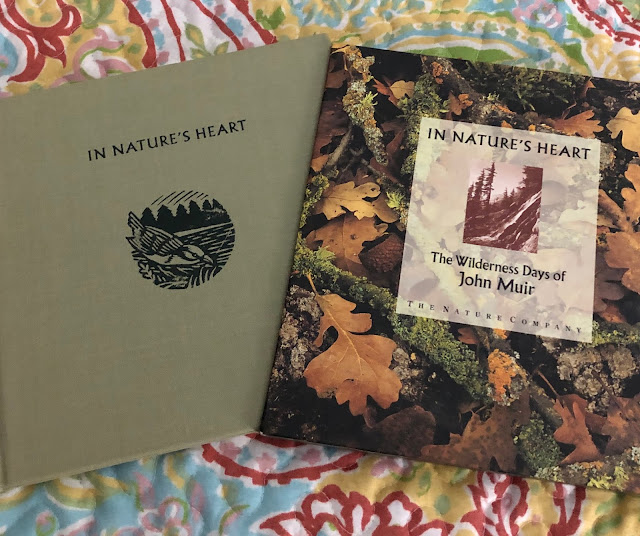 The fall leaves on the cover called to me even if the color is dated by now. It's a used book with a copyright of 1991. It has the book and then a box for it. I like it.

Initially, I misread the description and thought it contained sketches of his in color which I thought was odd. Actually, it contains photographs by someone else and they are good and appropriate to the topic. [Quick update - I finished reading this last night (July 7) and was curious about the photographer, James Randklev. He has this website and his work is still very, very excellent.]

Sometimes, you don't have time for even an entire chapter and just want a little something to chew on. This provides that.

Likewise, as mentioned, I purchased a book of his quotes and I provide a few here for your enjoyment. 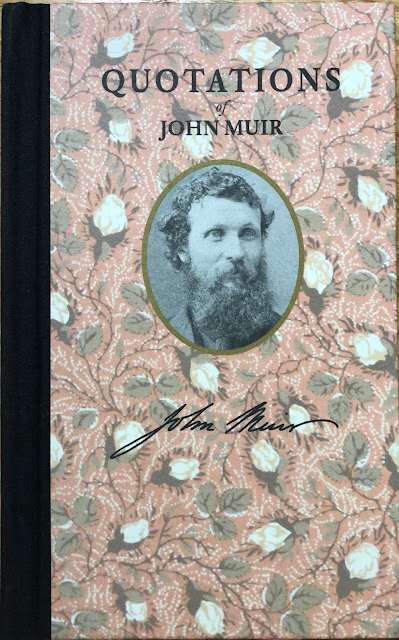 Aren't these just gold? They are just a sampling. I can see myself reading this book over and over again. It's sitting next to another book of quotes that I read from regularly:

You know, it occurred to me this past week, how much time do we spend each day checking social media or reading things online? Probably more than we'd care to admit. How much of it fuels us really? What if we spent, say, 10 minutes at a time reading a chapter or a few quotes of something instead? It would feed our minds and souls much more, I think. Yes, we do need to keep up with the news - to some degree, but I think we should avoid over-saturation - and it's nice to see what friends and family are up to, but too often, social media is a cesspool of negativity and vileness, quite frankly. And, as I mentioned recently, Facebook in particular is just evil. We need to starve the beast.

Toby and I have advocated for returning to blogging and email - "old school" - forms of communication. At least while we can before our freedoms there are limited. Interestingly, some people I follow on Twitter are of the same mind. (I'm on Twitter just a bit. It's the greatest of the cesspools, but I've had some positive interactions with Orthodox converts / Catechumens on there and we pray fro each other. Otherwise, it's really tough to take. I like my Instagram better, though it's owned by Facebook. I don't post anything on there anymore, but benefit from those I follow: Orthodox quotes, recipes, photographs of the National Parks.)

Anyway, not to drag this post down with that kind of stuff, but it's relevant and part of the reason why I'm blogging more and reading more and off social media more. It was funny, at first I found myself still checking it several times a day even if not posting. Then a few days went by without checking it at all and I didn't really miss it. It was like a detoxing process. Then I replaced that with other things.

Since we've been more and more off of social media than on, I've found three things are true for me: 1) I feel much more peaceful overall; 2) I'm getting more done - both professionally, domestically, and with my hobbies; and 3) I'm reading more books.

When I've read about people like Muir and our Founding Fathers and so forth, it's been quite interesting to note that they always seem to both read and write extensively and constantly. Most seemed to have a love of nature and at least walking in it (some were very big walkers). Modern man, as a whole, does not seem to do that and I think we are all the worse because of it.

We've long known that Americans do not read enough books. Let's change that, too, while we're at it. 😊 What are you reading? 📖 What would you like to read? 📚

Thanks for reading [this]!

Another Reason Why Orthodoxy Is Where I'm Supposed to Be